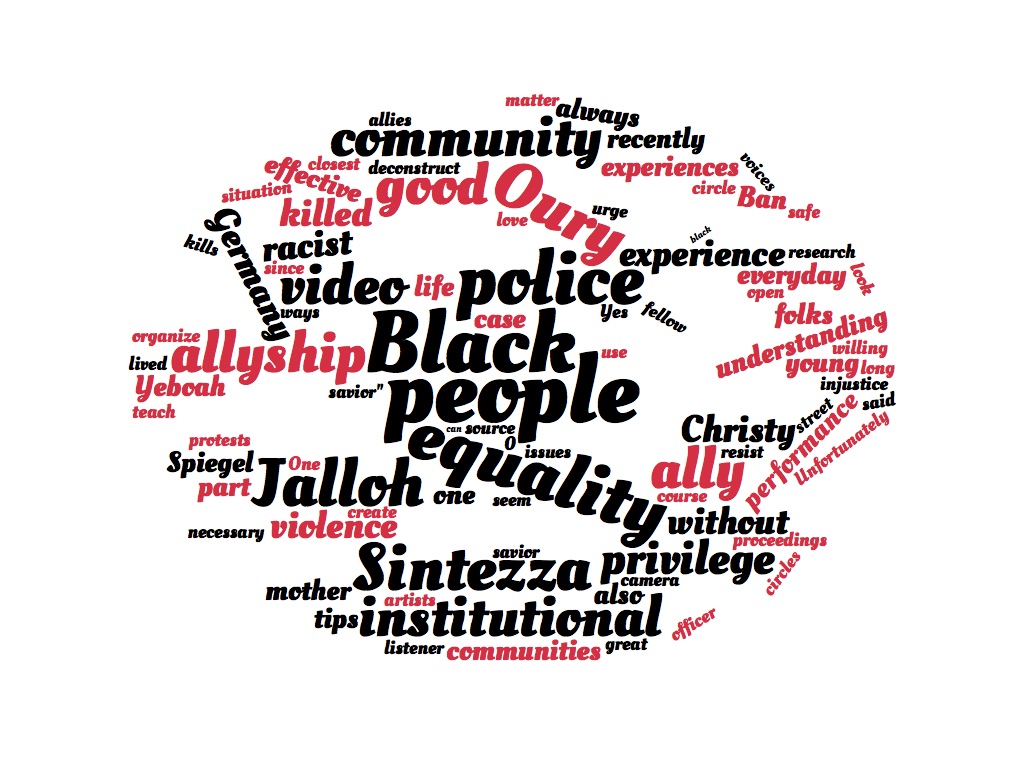 One of my closest friends and fellow musicians recently learned that his younger brother was killed by a police officer in the United States. A young black man killed by the police on the street. It is terrible! We can only guess what the family and relatives have to go through now. Thanks to a camera that the policeman wore on his uniform, the whole world can now watch the online uploaded video about this inhuman injustice and see for themselves. Black people and People of Color experience racist police violence not only in the Americas, but also in Germany and Europe.

Yes, of course, there are responsible police officers who do a very good job. But as long as there is racist police violence parallel to that, Black people and People of Color will be affected by it. And this phenomenon is not only found in distant America. Unfortunately, this is also the case in Germany.

Oury Jalloh: He burned in a prison cell in Dessau in 2005. There he allegedly lit himself on a mattress. The case has not yet been clarified.

Amadeo Antonio Kiowa: murdered by right-wing extremists in 1990. Amadeo Antonio was one of the first victims of right-wing violence since the reunification of Germany. He was beaten to death because he was Black.

Christy Schwundeck: Shot in 2011 by a policewoman at an employment office in Frankfurt / Main. “The proceedings were stopped, the official is said to have acted in self-defense. However, the husband and brother of the killed are surprised at the contradictory testimony of witnesses. “(Spiegel, March 22nd, 2012)

A young black video blogger by the name of Yeboah has shared his experience, which he recently had to make, very forcefully and honestly.

He was treated racist and as a criminal by the police just because he is black. Here you can find the video from Yeboah (in German).

Maybe you are wondering what all this has to do with me as an artist or what you can do about it. We artists or musicians can not separate our identity from our art form, our work. Everything experienced and lived is part of me and my music and performance. As a Black woman, Sintezza, mother, I experience our racist society in my everyday life. So when I perform on stage I ́m still a Black woman, Sintezza, mother and not a white person. Our experiences always resonate in our art. It ́s part of me and my performance. It doesn’t matter whether it’s a political song or a love tune.

Back to everyday life. What can people do if they get into a police check? What are you to do and what not? The Ban Racial Profiling campaign has produced some very good videos with behavioral tips during police checks.

This is the video in Romani language:

This is the video in English:

What can you do if you are not affected by racism? In the above situations it is always advisable not to look away. Remain in the place and show presence.

Here are some tips on how you can act as an ally. (source: mashable.com)

1. Be willing to listen and learn. In order to be an effective ally, it’s necessary to understand the experiences of those you want to support. The best way to reach that understanding is to be a good listener. 2. Help open up spaces without taking them over. As an ally to people of color, it’s important to use your own privilege to assist in efforts toward equality. It’s great for white people to help organize protests and create safe spaces for people of color, but not when when white voices are centered and elevated over communities of color.

3. Do your research. Because, regardless of what white folks think, it is not the job of black folks to teach you about racism and why it’s wrong.— Molly (@mollyrosestl) May 2, 2015 You can’t be an effective ally if you don’t know what the issues are. And you can’t help deconstruct institutional racism without first understanding how it is built.

4. Resist the “white savior” complex. The white savior complex manifests itself in many ways, and allyship tends to be one of them. As an ally, your role is not to “fix” communities of color. It is not your job to swoop down and take action on their behalf without knowing what the community needs to begin with. It might be easy to succumb to the desire to do things that seem good for others because they make you feel good, but it’s important to resist that urge and reexamine how to help.

5. Start in your own circle. White allies usually have the advantage of being able to communicate with more white people within their own circles. You have the chance to help people of color by promoting equality and racial justice in your own community.

Be the change you want to see in the world!